KMCControls.com will be offline for planned maintenance December 2-4. No orders can be placed during this period and the Partner Portal will be unavailable. If you have any questions, please reach out to us at info@kmccontrols.com.

It consists of the following components, installed on an AHU, RTU, or unit ventilator:

The system measures outside and return air by characterizing damper performance. A characterization curve allows the controller to determine airflow percentages at each angle of the damper. The system’s programming generates the curve using a Learn Mode sequence, leveraging the relationship between the inclinometer and a mixed air equation. During Learn Mode, the damper is positioned at several known points. At each point, the airflow and outside, return, and mixed air temperatures readings are allowed to stabilize before being sampled and averaged. Thereafter, the sensors are no longer needed to measure the airflow rates, but can be left installed for recalibration and fault-detection purposes. 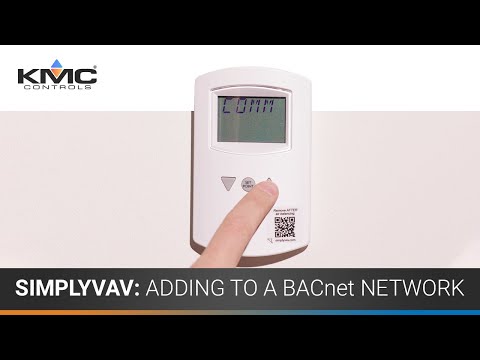 SimplyVAV: Adding To A BACnet Network