Building automation systems use protocols to standardize the way devices communicate over networks. For the purposes of this blog, a protocol is an accepted rule or standard for data sharing between building automation equipment. There were many different protocols developed as equipment manufacturers released new products to the market. KMC Controls® was not immune to the trend of developing proprietary protocols. We had our KMDigital line in the ‘90s. But we were quick to see the benefits of open protocols and the industry began shifting away from proprietary systems. This is mainly because open systems allow for greater flexibility, scalability and interoperability. 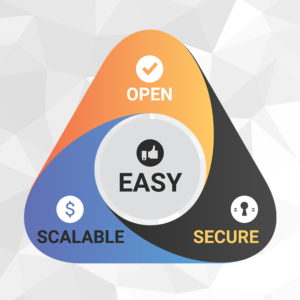 A fully open protocol is one that is developed and deployed to equipment without licensing or fees. Today, KMC is dedicated to using open protocols in the building automation space, such as BACnet, Modbus and SNMP.

The main advantages of using an open protocol include:

Together, these benefits touch the crux of open protocols – interoperability and flexibility with multivendor support, integrations and communities.

The frustrations with proprietary systems are why KMC created the KMD-5551E Translator, which allows buildings running entirely on KMD devices to tie seamlessly into BACnet systems by translating between KMD devices and networks to a BACnet network.

KMC is proud to build our automation equipment on top of fully open protocols like BACnet. By being an open, secure and scalable solution, we seek to best serve and support our customers. And you can better serve your customers by providing equipment that will give them freedom of choice, control and their future.

Image that even right now as you read this, you are using the world’s largest open protocol, TCP over IP (the internet). And as operation technology and controls systems continue to use more open protocols to operate with other control systems and IT systems, the future of automation will be in the Internet of Things, connecting all systems for a smarter more efficient future.