At their core, controls are the devices in an electronic HVAC system that govern various equipment. This happens thanks to data communication between devices, hardware, and computer systems. 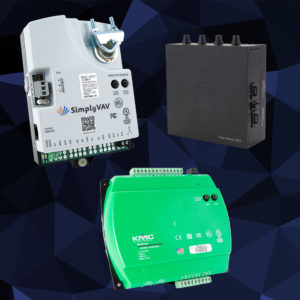 Direct Digital Control, also known as DDC, is the automated control of one or more devices using an output signal generated from computer calculations. These are based on input signals and desired environmental criteria. DDC has been used in BAS since the 1970s. A DDC system is simply a collection of electronic controls and devices sharing information to monitor and manage indoor environments.

DDC is used in all new installations and can be installed in existing buildings where mechanical or pneumatic systems are in place. These systems can be retrofitted and upgraded to support these controls.

Let’s look at an example DDC system. We start with a controller, a device that processes input signals and calculates output signals necessary to control the internal environment using building equipment. Sensors supply the inputs – things like air temperature, humidity, CO2, air flow or pressure signals. This sensor data represents the current conditions of the space. The controller’s internal computer is programmed to make decisions based on sensor input and desired setpoints, calculating the needed outputs. If a space is too hot, for example, the output on the controller will open a damper-actuator to let more cool air into a space.

In order to control equipment such as dampers, air handlers, boilers and chillers, the DDC program must consider the time it takes for this equipment to react. This is done using Control Loops, mathematical calculations that consider the current sensor input, the desired environment and the current control signal to determine the new signal to output to the equipment. Besides these loops and their setpoints, there are other criteria used to control the internal environment of a space, such as whether or not the space is occupied, and fire or equipment safety signals. For example, if the fire safety has been triggered, the damper closes. If the room is not occupied and the temperature is below the unoccupied heating setpoint, the room begins to warm. If the CO2 level is too high, outside air is brought in. The sequence determines the general operation of the DDC, while its control loops make fine adjustments as needed.

All DDC manufacturers allow technicians to specify desired setpoints for the controllers. While most vendors have incorporated pre-written, uneditable programs into their controllers, some manufacturers, including KMC Controls, allow more flexibility by providing a way for technicians to easily modify pre-canned programs.

Finally, one other key aspect of DDC controllers is the ability to communicate with other controllers and computers. This creates more data for the controllers to better control the equipment, and for the computers to monitor performance. And with modern platforms, such as our IoT platform KMC Commander, you can now visualize and command control of your system with a phone or tablet. Once your control system is in place, it is easy to use.

Benefits of using controls include:

Controls are the foundation of a BAS. With no control scheme in place, you typically have thermostats that read temperature, and heat or cool a space based on that reading. It’s either on or off. This means wasted energy, limited control, and reacting to problems instead of proactively maintaining equipment. With more than five million buildings in the United States alone with no controls in them, there is a great opportunity in the market for integration and for end users to see real benefits.